Home » Marriage » Misleading Divorce Statistics … There IS Hope for Marriage!
May 15, 2014

Misleading Divorce Statistics … There IS Hope for Marriage!

You may have heard it said that 50% of all marriages will end in divorce.  Many reputable studies and reports in recent years have shown that THIS JUST ISN’T TRUE!  The actual divorce rate is much lower.   The following article reinforces this very clearly.  It comes from the May 7, 2014 installment of Washington Update distributed online by the Family Research Council.  When you hear anyone spouting off about the imminent end of marriage … DON’T BELIEVE IT!  Marriage between one man and one woman is an institution put in place by God Himself in the perfection of Eden.  God will NOT allow it to disappear.  It will CONTINUE to be a beautiful gift from God that reflects the perfect love between Jesus and His bride, the church.  Marriage in God’s way IS here to last! 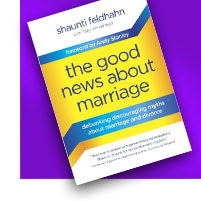 Is it possible, reporters are asking, that everything we’ve been told about marriage and divorce is wrong? Shaunti Feldhahn thinks so. The Harvard-trained researcher spent the last eight years trying to get to the bottom of the data on broken marriages — and the results might shock you. We’ve all heard the statistic that half of all marriages end in divorce. Not so fast, says Feldhahn, who lays out the argument in her new book (The Good News about Marriage) that the actual divorce rate isn’t even close to that number.

Like most sociologists, Shaunti says she’s “stood up on stage and said every one of those wrong statistics.” Now, she’s on a mission to correct those assumptions. If anything, she points out, the divorce rate is dropping. “First-time marriages: probably 20 to 25% have ended in divorce on average,” she explains. “There is no such thing as a 50% divorce rate. It’s never been close. Right now,” she tells Billy Hallowell of The Blaze, “…72% of people are still married to their first spouse — that’s Census Bureau data.”

At the very least, Feldhahn estimates, the divorce rate is 27-50% lower than people think. “Starting in the 1970s — that’s when those projections started — when no fault divorce started, the divorce rate skyrocketed. Suddenly, there was this explosion in divorce… it has fallen according to the crude divorce rate… 32% since 1980.”

… One of Shaunti’s favorite things is shocking people with the news that 80% of marriages are happy. “The sense of futility itself pulls down marriages. And the problem is we have this culture-wide feeling of futility about marriage. It’s based on all these discouraging beliefs and many of them just aren’t true.” I don’t know about you, but I could use some good news on our culture — and the Good News about Marriage is exactly that!